On Monday November 14th, 07.00 o’clock in the morning, the Dutch second pirate radio station will be launched at 227 meter in the medium wave band. But that will not be under the name of “Swinging Radio Holland” as the station was unofficially called till now.

The American owners of the radio station discovered that Radio Holland already exists in ships radio communication traffic. “We don’t want to cause confusion”, says station director Jack Curtiss, “and that’s why we are going to change the name. Imagine that somebody comes to us about an accident on a ship.”

HEADQUARTERS
In the meantime, the leaders of the pirate radio station work feverishly. A headquarters is temporarily set up in an Amsterdam hotel. There reside at this moment two Americans and a South African; Bill Vick, Robert Thornton and Basil van Rensburg. And there Jack Curtiss plans his auditions, now getting ready to recruit Dutch Disc Jockeys and that’s why he returned to London. Following an interview with him published in our paper he received inquiries from 30 candidates. They incuded professional radio people from Hilversum, free-lance DJ’s, journalists and the rest from different walks of life. Thursday evening Jack Curtiss left for Amsterdam. In advance, he telegraphed all applicants to come to his hotel. There he staged his auditions, recorded the voices on tape, which were later edited and reviewed in a leased studio and on that basis, he decided during one hour before he left, who he would hire and who not. “I wanted to hear them all” so he said. He now hired six of them and that’s enough. “No, they are no “golden boys”, no people form Hilversum and no free-lance people”.

ENTHUSIASM
“I wanted to have people who are enthusiastic, who are prepared to stay on a ship for at least 14 days uninterrupted and who want to make somthing big of the station.” That’s why the “golden boys” were not in sight. “In the first place, they think always they know best, which is not necessarily bad, but that doen’t work in our conept.” Ofcourse always something unexpected can come up and in that case, he has in his dossier a piece of paper with ten other names listed.

TEAM
In the next week Curtiss leaves for Holland again. Then he’s going to forge a team of out his new boys. That’s why he didn’t want to reveal their identity. “I first must mold them before others do, I’m gonna train them and I’m gonna make them the best DJ’s they possibly can be,” he says.
“The conditions are favorable, because they will come to work a crew of very experienced American and English DJ’s who from our ship 24 hours a day staffed Britain Radio and Radio England.They will learn to treat every kind of music especially because we don’t know yet which direction musically we will go,” said Curtiss. “That’s we didn’t rely on hiring on DJ’s with lots of previous radio experience. They mostly are too specilized in a particular kind of music.”

NEW NAME
The leaders of the pirates are moving out of their temporary Amsterdam headquarters and keeping busy to lease an office and to look for staff members. Basil van Rensburg is responsable for the advertizing sales but has a truly big job ahead of him yet.

They are also busy coming up with a new name for the radio station and, in cooperation with a big advertising bureau, they are looking for the way how to design programmes for listerners who don’t find their musical tastes satisfied by Radio Veronica. 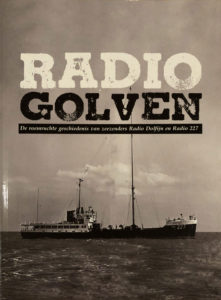